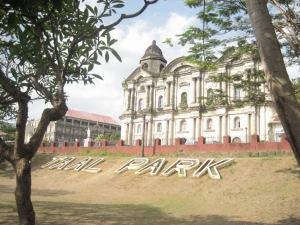 One of my favourite churches is the Basilica de San Martin de Tours better known to locals as Taal Basilica. On my first visit I was overwhelmed by its grandeur! The feeling on the other hand was replaced by aura of hope and positivity. Even before we left I longed to revisit the place which I usually do everytime I have a scheduled trade audit in the area. I always go to Saint Martin’s specially if I felt like I’m losing grip on something.

The Basilica according to available information is the largest in the country and in Asia with a dimension of 96 by 45 meters. Basilica de San Martin de Tours was constructed by the Augustinian Missionaries in 1575 in present day San Nicolas, Batangas by Fray Diego Espinar with San Martin de Tours as the patron saint. It was rebuilt in 1642 of strong materials and 112 years after in 1754 the church was destroyed along with the town Taal in the eruption of the Taal volcano and was transferred to the current location. Father Martin Aguirre donate donated the land in san Nicolas.

The church was reconstructed in 1755 and completed in 1782 through the supervision of Fathers Gabriel Rodriguez (1777) and Jose Vitoria (1782). It was Fr. Ramon del Marco who decorated the church, built convent and paved the processional road with bricks.

However it was damaged by an earthquake in 1849 and Taal Volcano eruption in 1852.

In 1856 the Basilica was reconstructed for nth times through the supervision of Fr. Marcos Anton and Spanish Architect Luciano Oliver. The structure was completed by Fr. Agapito Aparicio in 1878 and he added the Doric Style Altar

Another earthquake in 1942 damaged the church and destroyed the bell tower on its left side, it was reconstructed later yet its appearance does not match to Church. The church was then restored in 1953 in preparation for the Canonical Coronation of the Our Lady of Caysasay and it was declared a Minor Basilica in December 8, 1954, the third to be given such honor.

In 1972 the basilica was restored by the Taal Quadricentennial Council and through the Presidential Decree No. 375 it was declared a National Shrine on January 16, 1974.  Just like all other churches erected during the Spanish Era Taal Basilica survived natural calamities and is still the beacon of Filipinos.

A typical Archer who loves to travel and explore. Very much fascinated with life and what it can offer. View all posts by nicetiesoflife